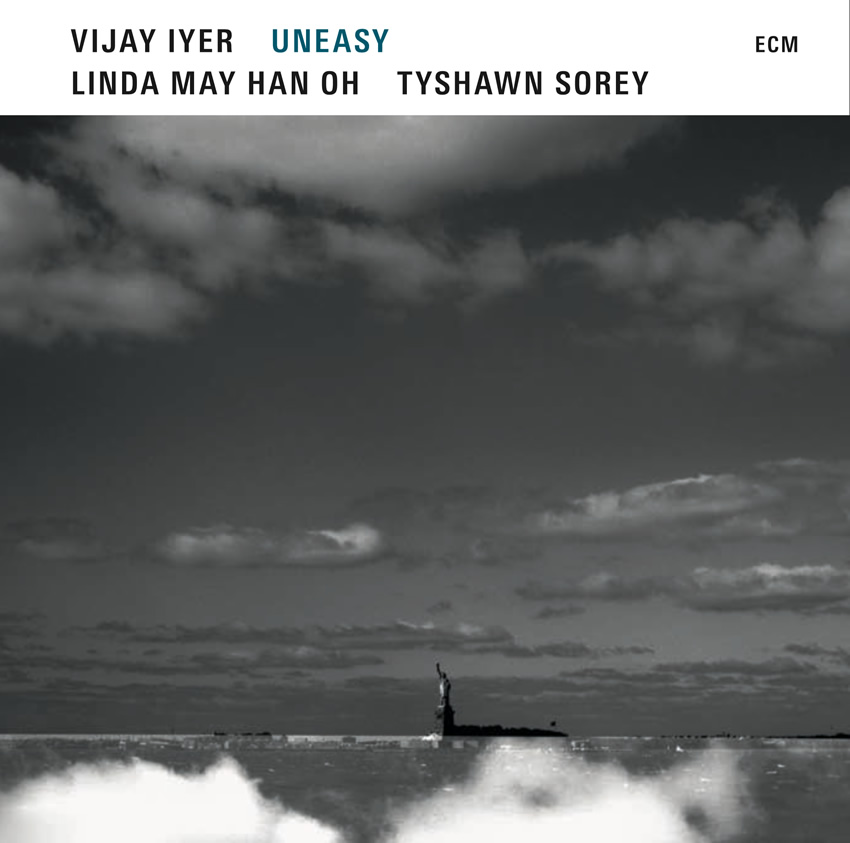 Uneasy, with Tyshawn Sorey and Linda May Han Oh, is Vijay Iyer’s second trio album on ECM and his seventh appearance as a leader on the label. Navigating from one shape-shifting idea to another, he continues to push boundaries from one album to the next. His unique musical approach has gained him many accolades and much praise from the international press, The New York Times summarizing his persona as a “social conscience, multimedia collaborator, system builder, rhapsodist, historical thinker and multicultural gateway.” On Uneasy, he draws on the history of the music while continuing to push it forward. In the course of this endeavour, the political and social turbulences dominating today’s American landscape are reflected in musical contemplation and tense space. In his liner notes, Vijay elaborates on how today “the word ‘uneasy’ feels like a brutal understatement, too mild for cataclysmic times. But maybe, since the word contains its own opposite, it reminds us that the most soothing, healing music is often born of and situated within profound unrest; and conversely, the most turbulent music may contain stillness, coolness, even wisdom.”

Uneasy portrays this cast’s first studio session after having played together throughout 2019 – Tyshawn and Vijay’s partnership even going back to 2002, when they recorded Vijay’s quartet album Blood Sutra. They’ve worked together frequently since, including on two of Vijay’s ECM releases: the live film score from 2014, Radhe Radhe: Rites of Holi, and the landmark 2017 sextet album Far From Over. Linda May Han Oh is a more recent collaborator of Vijay’s, although their professional relationship has been developing for several years. A consistent guest faculty member of the Banff International Workshop in Jazz and Creative Music in Alberta, Canada, the bassist has become well acquainted with Vijay and Tyshawn, the workshop’s co-artistic directors.

Linda and Tyshawn have both recorded with ECM before – Sorey playing on Roscoe Mitchell’s Bells for the South Side and Oh adding her unique voice as bass to German pianist Florian Weber’s ECM debut Lucent Waters. Her nimble language and Tyshawn’s robust but deeply musical swing add the complementing pieces that set Uneasy apart from Vijay’s past work and build a striking contrast to his celebrated 2015 ECM trio outing, Break Stuff. “This group has an energy together that is very distinct. It has a different kind of propulsion, a different impulse and a different spectrum of colors,” raves Vijay in regard to his trio partners.

Lending the album its title, UnEasy was originally the name of a collaborative work created by Vijay and choreographer Karole Armitage in 2011. As an album, Uneasy builds on the paradox the title implies and takes up the underlying atmosphere of threat it alludes to – a decade after and ten years deeper into a world and time of unrest.

On Uneasy, eight Iyer originals, composed over a span of twenty years, are joined by a rendition of Cole Porter’s “Night and Day” as well as Geri Allen’s “Drummer Song”. The latter represents the second Geri Allen composition on an Iyer record after his co-led date with Craig Taborn, The Transitory Poems, which ends on a segment of Allen’s “When Kabuya Dances.” Among other occasions, Vijay played a rendition of “Drummer’s Song” in light of the Geri Allen tribute concert at the New York City Winter Jazzfest in 2018 – Downbeat magazine calling his performance “one of the evening’s early highlights” and “compelling with its hypnotic melody and insistent polyrhythms.” On the version found here, Vijay captures the composition-defining ostinato on piano before it’s broken up into fragments and consecutively divided among the trio. Vijay knew Geri Allen well and comments on her tricky composition: “I remember intensively practicing “Drummer’s Song” when I first learned the way that Geri had played it in the trio format. It’s hard to pull off and you have to keep your balance. Geri would do it seamlessly, without drawing attention to it, but I had to realize how much harder it is than it sounds.” Vijay stresses the importance Allen had in his life: “She was a huge influence on me as a musician and a very kind, generous mentor, a friend, and a colleague. I want to uphold her legacy as much as I can and to contribute to her memory.”

The album is introduced by “Children of Flint,” a harmonically angular structure with a quietly urgent rhythmical drive. Written by Vijay in 2019, the song is dedicated to children hailing from Flint, a town located near Detroit in Michigan. Vijay emphasizes the importance of the composition’s tragic background: “Through gross negligence and systematic racism, the entire town’s drinking water supply was poisoned with lead. Thousands of children in that town, who are mostly African American, have been exposed to unsafe levels of lead, leading to widespread health issues, chronic illnesses and learning disabilities. This piece is dedicated to those children.”

“Combat Breathing” was initially written to accompany a political action at the Brooklyn Academy of Music in the wake of the first Black Lives Matter protests in 2014. The song, built around an eleven-beat cycle, reveals a recurringly descending cadence that offers each member of the trio plenty of space to unfold in and experiment with. An especially quiet passage halfway through the song provides the listener with Linda May Han Oh’s poignant, melodic solo and demonstrates the trio’s dynamic breadth.

Much of Uneasy’s music builds on improvised interplay and spontaneous shifts of focus that Vijay, Tyshawn and Linda pursue collectively. “I think we’ve always had a wide range of energies we can explore when we play together. It’s not just about the form or about executing things with an agenda to impress anybody. Sometimes it’s just about tapping into some kind of intuitive space and try to find something beneath the surface that animates or propels.”

When Vijay talks about “tapping into ambient energy” and “the forces and motion around us,” he is in part describing the exploratory spirit and impromptu emphases that happen beyond what can be captured in musical notation. The kind of moments that also happen on “Configurations” – an early piece of Vijay’s that first appeared on his 2001 album Panoptic Modes. “It was an early attempt of mine to work with certain rhythmic ideas from south India, including the lengthy coda of tempo transformations. Tyshawn and I had started working together not long after that album was recorded, so we dug back into our memory banks to adapt it for this trio.”

“Retrofit” represents another adaptation of a piece originally intended for a different format. Composed in 2019, the pianist wrote the rhythmically dense exercise with his sextet in mind. Elements of the composition, such as constantly shifting drum parts or its rather fragmented, as opposed to linear, surface show parallels to parts of his sextet album Far From Over; the trio arrangement dissects the tracks components anatomically, down to the structures skeletal core, making it a fierce display of each musician’s strong character.

Cole Porter’s “Night and Day” represents the disc’s sole standard and Vijay’s nod to the past and its tradition. Inspired by Joe Henderson’s interpretation, as heard on his 1966 album Inner Urge, Vijay adapts the arrangement to this trio. “I especially loved the way the late great McCoy Tyner navigated Henderson’s harmonic maze. I’ve studied Tyner’s fluidity, hard groove, and deep sonorities for decades. In the wake of his passing in 2020, I was again revisiting the moments in his playing that were formative for me and was glad to have this recording as a humble testament.”

A solo meditation on piano, “Augury” captures the atmosphere and spirit of a session surrounded by clouds on the verge of an unravelling storm. “The title refers to an old method of divination. When we recorded at the end of 2019, we were on the crest of a year that turned out to be a global nightmare. Was the threat already apparent, if we searched our intuitions?”

Uneasy picks up where Far From Over left off, reflecting on the inequalities and troublesome sociopolitical landscape of our times. But where Far From Over stressed that there lay “much more work ahead,” as Vijay puts it, Uneasy amplifies the urgency – or maybe more accurately – the emergency of the turmoil, agitation and disparity that prevails in society around the globe. “My compositions on this album span over the past twenty years and the initial Uneasy project was in the middle of that, ten years ago. It was hinting at something that’s unstable. We already had precarity and unrest. There’s always been something disturbing going on, and now we see it explosively unfolding before our eyes.”

Uneasy, recorded at the Oktaven Audio Studio in Mount Vernon, New York, was produced by Vijay Iyer and Manfred Eicher.